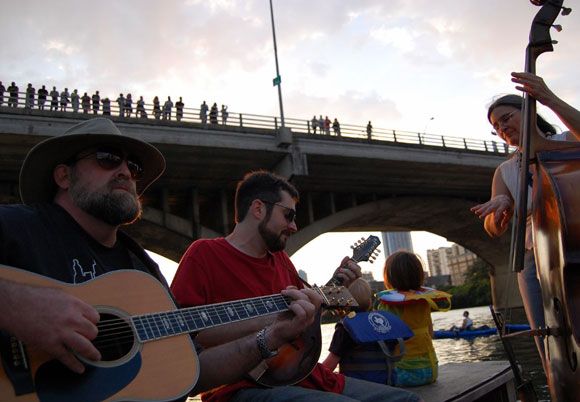 Out of the Blue got started when guitarist Jamie Stubblefield pulled together some friends to play a little bluegrass. These days the lineup has Jamie joined by Ginger Evans on bass and Rob Lifford on mandolin. The band’s set features tastes of swing, country, folk, rock, Celtic, and even classical music, with a blend of vocal and instrumental tunes.

Rob was a typical high school guitar geek, fooling around with all flavors of rock, pop, and jazz until he started to catch the bluegrass bug in the mid ’90s. It wasn’t until 2001 that he began to give more attention to the mandolin he’d picked up a few years before.

Ginger jointed OotB in the summer of 2008. She’s a longtime veteran of the central Texas acoustic music scene, having played with various bluegrass, western swing, and folk acts over the years.

Dawn Biega — a founding member of the band, but unfortunately no longer in Austin — began with the cello as most cellists do (you know, with classical music) but simply couldn’t be fenced in. Her years of performing have given her a chance to play a wide range of styles.

Out of the Blue came together in the winter of 2004/2005 and played their first gig at the The Motley Menagerie in Kyle, Texas. These days they can be found playing at any of the SFC Farmers Markets, private parties & weddings, or restaurant venues such as the Threadgill's North, Green Mesquite BBQ, Railroad BBQ, or Patsy’s Cowgirl Café.

They'd be very happy to play at your venue or event as well: just get in touch and you'll find them quite friendly. They won't talk about themselves in the third person on the phone or via email, either, as they do on this page.

Out of the Blue is a proud member band of the Central Texas Bluegrass Association.